KOMNI is a Location-Based Mobile Social Network designed to promote real-life interactions between strangers or friends, as well as interest, location-based discovery of places, events, people.

Its main interaction vector is the mobile and revenue is generated through deals with mobile operators that benefit from increased revenue from mobile phone sales and service usage, and in turn provide visibility for the service.

The duo was composed of Diogo and I, the context of the project was academic. We tried to get funding but weren’t successful, the project was iced due to lack of resources. 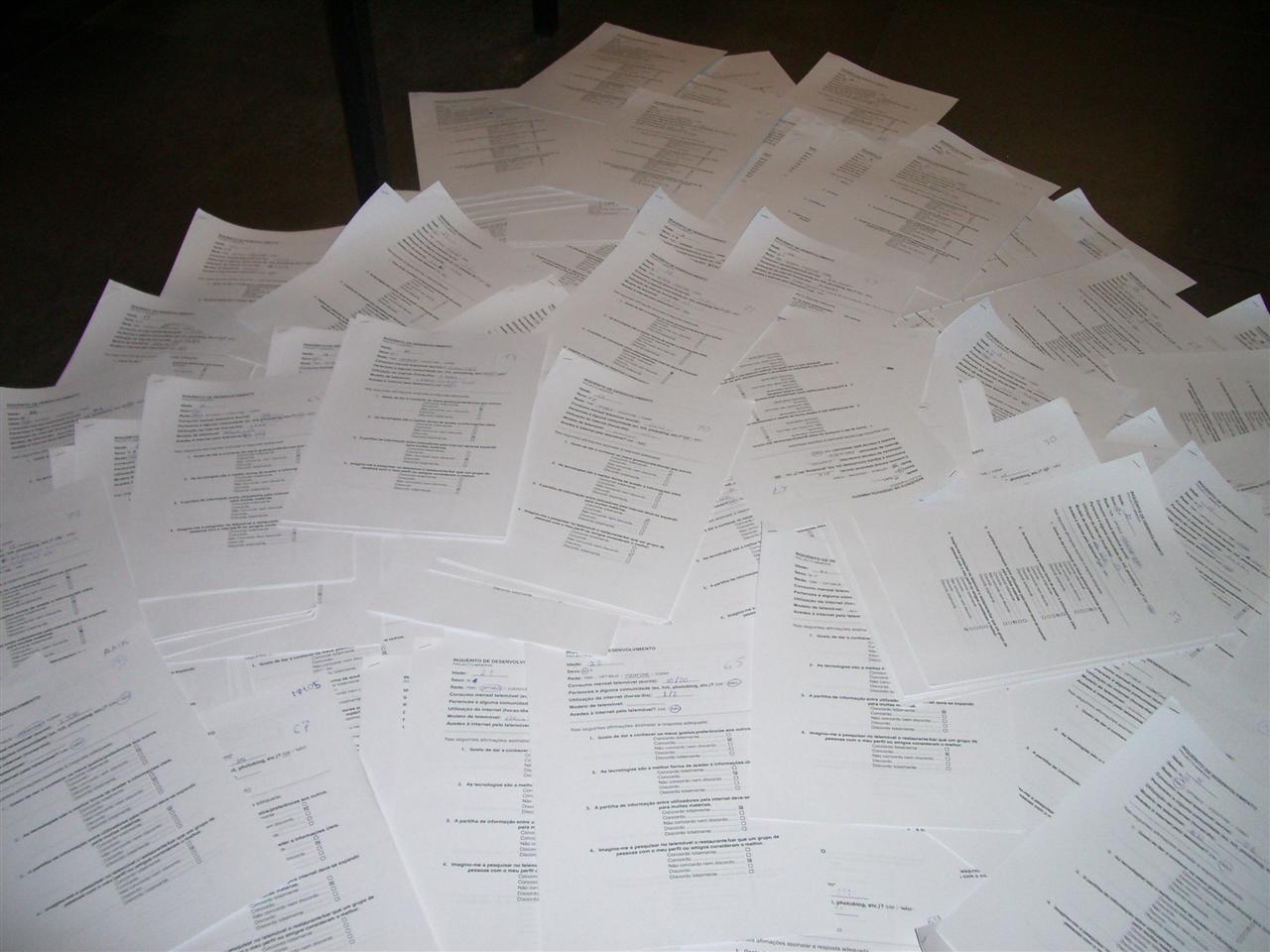 The project was first conceived in the summer of 2004, its purpose was to be an exercise that would allow us to put our skills to practice.

It matured along the months, sitting a bit idle between our classes, and finally in late 2005 we started working on it.

We worked on the business case, features, technology, development strategy, and came up with a pretty solid project.

These weren’t requirements in our assignment, and weren’t even graded, we chose to do this because we wanted to go the extra mile and this was a very exciting opportunity to prove ourselves, create something we liked and solved some of the problems we saw in the social networks at the time - Hi5, Last.fm, MySpace, etc.

It was also great to be able to count on: 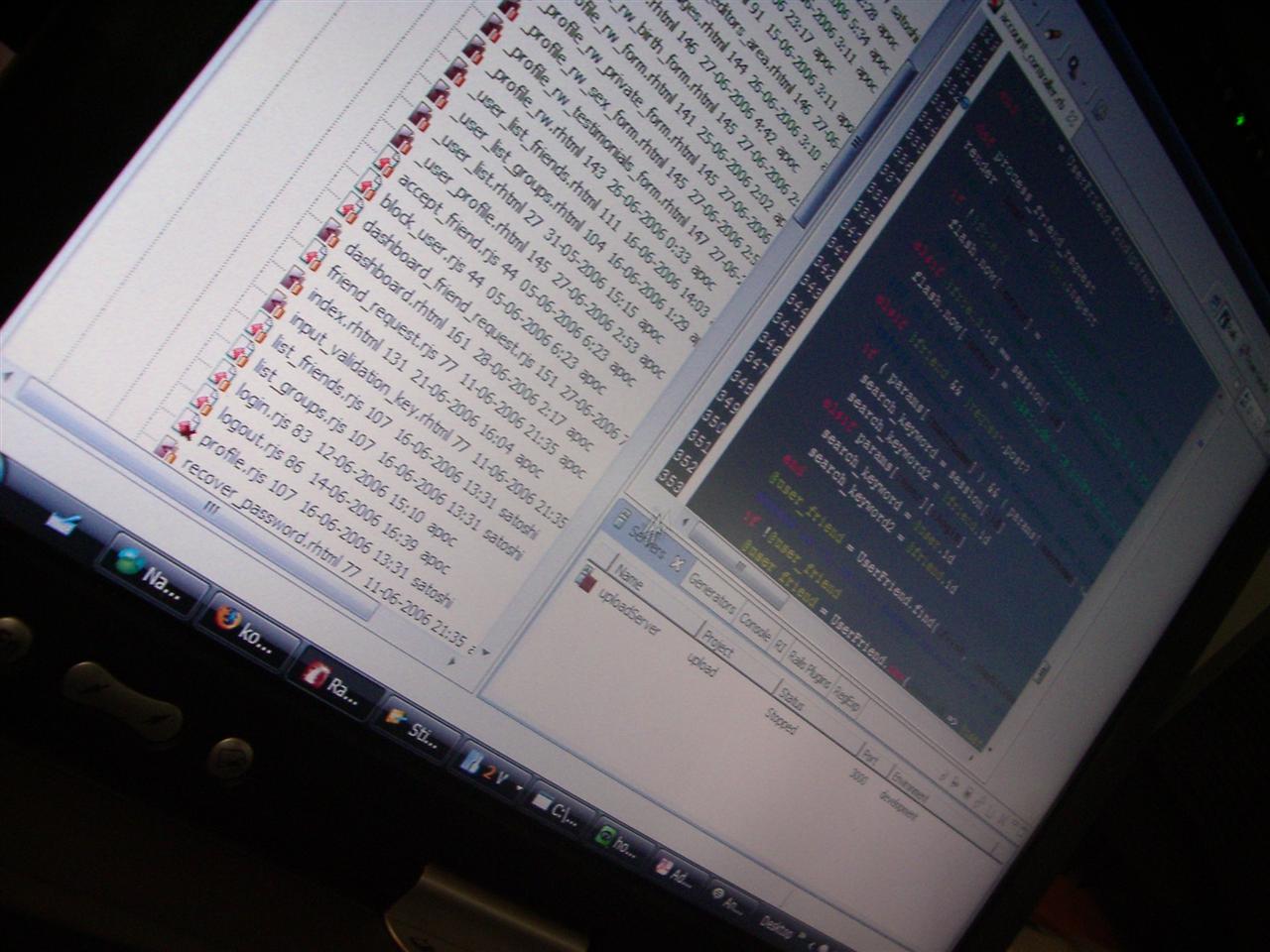 Production started in late 2005 through early 2006, 5 months of part-time development that included familiarisation with the technologies being used:

We did the setup of our development environment, picked an IDE, grabbed a copy of Agile Web Development with Ruby on Rails and got down to business.

The first prototype was a web-only version of the network, it was mainly a demonstration of how we would structure the network and the experience we envisioned for it with a set of basic features. The mobile discovery based on the user’s interests and location wasn’t implemented as it required R&D, time and deals with Mobile Networks (GPS wasn’t common on mobile devices at the time, we needed to be able to access triangulation data, and don’t get me started on the precision of that data).

A Service Shaped by Need

We hated HI5, MySpace for their awful UX, cumbersome navigation and interaction.

KOMNI’s UI was properly structured and tested, with contextual actions clearly separated from website navigation, the design didn’t allow the user to mess it up with superfluous customisations like MySpace did that ultimately led to damaging their brand and be seen as ‘that crappy website full of sparkling stuff and audio players’.

KOMNI was mainly a mobile experience because we loved mobile and the web, and because we wanted to reach out to people who didn’t use social networks because that meant being at home, not outside socializing with friends, and that for them screamed: Looser.

KOMNI would be always with you, proactively notifying you about an event that might be relevant to you because you were frequently near the venue and your interests made it likely you’d enjoy it. Plus, besides suggesting the event it would also suggest people, places and more.

Yes it has a bit of Foursquare, Dating Service, Songkick, Last.fm, but that’s the point, it’s a useful, relevant service.

Because we were sick of networks where the generated content and interactivity was purely for leisure, no added value, no benefit for the world.

We wanted a network that besides leisure, would provide value for everyone, similar to what Gowalla tried to do, by offering you thematic lists, KOMNI would allow you to discover places/events/people/music, based on your personal preferences and profile.

You, as a tourist in a new city, would be able to pick up a KOMNI-enabled phone and explore the city knowing the suggestions made to you were relevant and not and not a generic ‘go here because everybody does’, you’d be able to communicate with the local tattoo community if that was your thing, which normally would require you to have an intimate relation with the locals - you’d still be able to forge those but no special previous connections would be required. 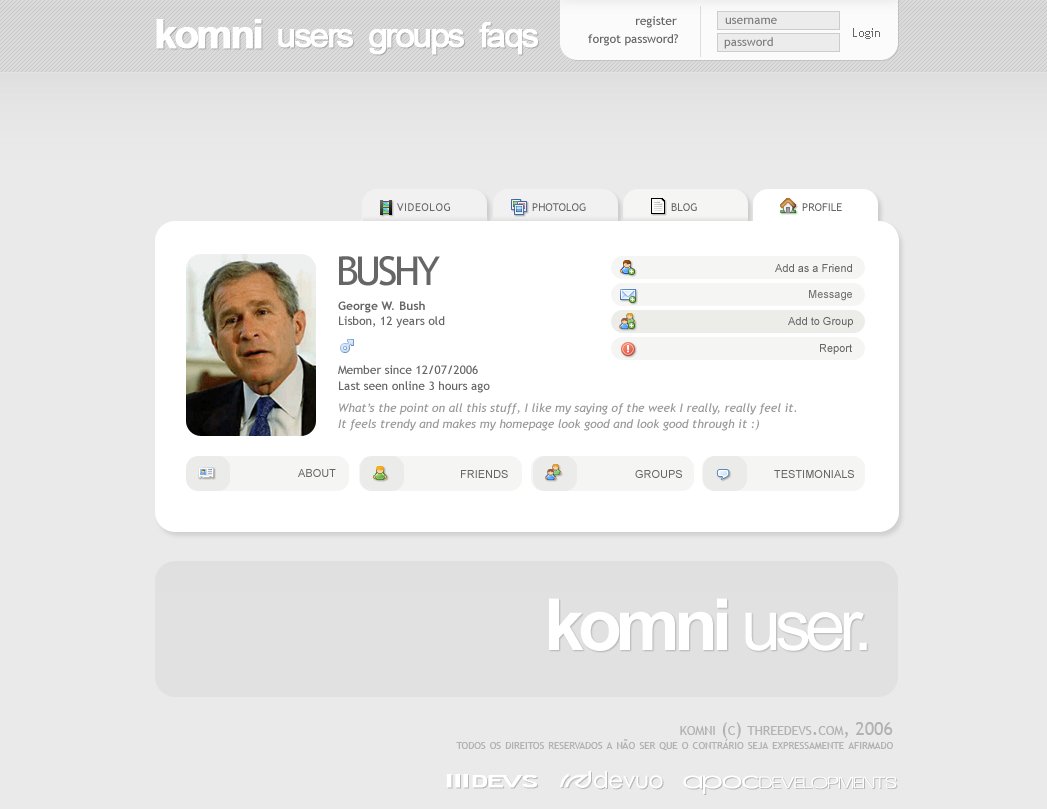 KOMNI, despite innovative, was a child of its time, it featured:

The target audience was relatively broad, individuals aged from 16 to 32, living in a dense populational area, medium income.

Tourists (KOMNI Traveler) were also part of our target audience, ideally with a KOMNI device you could rent/buy, and after a few questions the user would be able to take advantage of the already existing data built upon hundreds or thousands of interactions from the local users eg:

The service would be monetized in various ways:

Partnership with a mobile operator

A Mobile operator would provide visibility for the service on their mobile portal, or create a dedicated one, and data on their user’s location - to overcome technical limitations of the devices at the time, controvertial.

At the time, there was a MVNO whose target audience was very close to ours, called Yorn by Vodafone, and their market positioning was ideal for our service, they even had very irreverent ads like this one here and were frequently disruptive with their pricing and features. Years later a different Mobile Operator would create their own social network called Tag.

The selected Mobile Operator would: * have a service that promotes the usage of mobile communications - sms/mms/videocalls, * sell devices at a low price tied into the service * attract more users by * offering an innovative service * use a service-centric approach to revenue instead of the (still) current practice of charging for device and service

Companies and Users would be able to promote their events, places, businesses in the service, akin to twitter’s promoted content, but in case of KOMNI they would be hyper-targeted and thus increasing their efficiency.

Our development strategy was the classic Release Early, Release Often.

As mentioned before, the project was put on ice.

I didn’t manage to get funding, due to various motives:

I didn’t have the team, network, resources to further develop the service, eventually it faded into the background.

Were I not in Portugal and had these difficulties, KOMNI might’ve had a different fate.

I kept the service details unpublished for years and never wrote about it until today. The ideas in it lost its freshness over the following months. Twitter, Facebook, Foursquare, Tumblr defined a new social landscape.

From time to time I bump into an article such as:

There’s also a huge list of articles, bookmarks I collected along the years that are related to KOMNI -> pinboard/u:lmjabreu/t:minerva

Minerva - godess of wisdom, was our codename, and there are bookmarks on mobile web apps, DRM and content ownership, mobile browser stats and usage, initiatives from Google, Yahoo, H3, and many other research articles related to KOMNI.

The K in KOMNI comes from a texting trend among the Portuguese youth of replacing the Cs with Ks, it reflects the KOMNI’s target audience.